I got another wild hair recently, and I think it was inspired by potential future shame, which I decided I wanted to avoid. Over the past couple of months, we’ve been replacing our kitchen appliances, and are now (almost) down to just the stove. I say almost, because the misadventures of replacing our refrigerator are not yet complete – but that’s a whole separate post. I really want to replace the current electric stove with a gas stove, but that will require a bit of preparation, namely running a gas line through our crawl space and up into the kitchen. While we’re lucky enough to have someone that can help us with that, I knew something needed to be done about the crawl space when I realized I was almost hyperventilating every time I thought about our friend coming over to just give us the estimate.
So, the first step was to get inside and take stock of what needed to be done down there. It’s one thing to store your ‘treasures’ and know where they are so you can get to them when needed; it’s entirely another to view with a critical eye and ask yourself how you can reorganize them. As I did the latter, I realized there was going to be no reorganizing without some serious purging, and with that, the anxiety level shot up through the roof! How could I possibly part with that nasty, stained down pillow that doesn’t come clean? The things from high school I’ve saved for God only knows what reason. A cross stitch project that I started in high school, never finished but dang it, was still in its embroidery hoop (and probably has permanent creases in the fabric.) Funny thing about that one, is that while I have the directions to finishing it, I don’t have the color photo of how it’s supposed to look. I did find a picture of it on the internet though, perhaps I’ll print it out and see if I can find a family member who still does needlework. (Update on that, I learned last night my nephew does. Now if I can just convince him to finish it for me!)
After a few days of looking at what I’d been hanging on to down in that crawl space, I finally decided there was only one way out of the mess: I gave myself permission to have ZERO guilt about whatever I tossed out. None. Zip, zilch, de nada. Out went the pillows, some old frames, books, newspaper clippings, extra pots and pans, old Tupperware, and old blankets. I think I filled our garbage bin twice to overflowing. Then I resorted what was left, relabeled bins, moved a few things around and reorganized and suddenly it started to take shape. My husband got into it with me, and has been doing purging of his own as well, which has helped too as he got rid of old stereo cords, cable cords and wiring that we no longer will use.
The next step was to add shelving to the open wall studs on one side of the crawl space, to put small things there like the extra cans of paint we have from house projects as well as create a storage pantry. You know, for all the backup crap we HAD to buy to take us through COVID. The paint had been sitting on the floor of the furnace room, taking up space there, which was silly. Adding the shelves made so much sense, utilizing that space to store stuff out of the way.
It’s felt so amazing to get rid of this unused and unneeded stuff, so I’m really trying to apply the mentality to other rooms in our house too. Since we don’t have kids, it’s our nieces and nephews that will end up cleaning out this crap when we’re gone, and honestly, who wants THAT job? I can hear it now: “Aunt Beth kept what? THAT? Why?” or “What the heck was Uncle Mike thinking?” So, I figure if we can get on top of it now, it saves everyone a headache. (I can already hear my husband saying, “what do you care, you’ll be dead”, and he’s right, but there are some things I will always be concerned with, no matter what.)
For now, however, we declutter, lighten the load, get rid of old stuff that we aren’t using. I did stumble across a box that I hadn’t seen in ages, and opened it wondering what was inside and found an adorable set of tropical fish made of glass that are designed to be in a large vase or bowl of water. Some are attached to a base and a couple float. I have no idea where I got it, but it’s so pretty I’m can’t bear to toss it out. Otherwise if it’s broken, ratty or nasty, why keep it, and if it’s good and we don’t use it, maybe someone else will, so I also take plenty to Goodwill, or sell it on eBay or Craig’s List if it has value. And no, we aren’t going to make a fortune selling anything on eBay, I mean it’s not like we have an original Picasso hiding in the crawl space…or do we? I guess I’ll find out.

Update: I had a request for a photo of the fish. I wish there was a better bowl to display them in, but since we’re living under a “stay at home” order, and who really wants to go shopping now anyway, here’s what I’ve got. 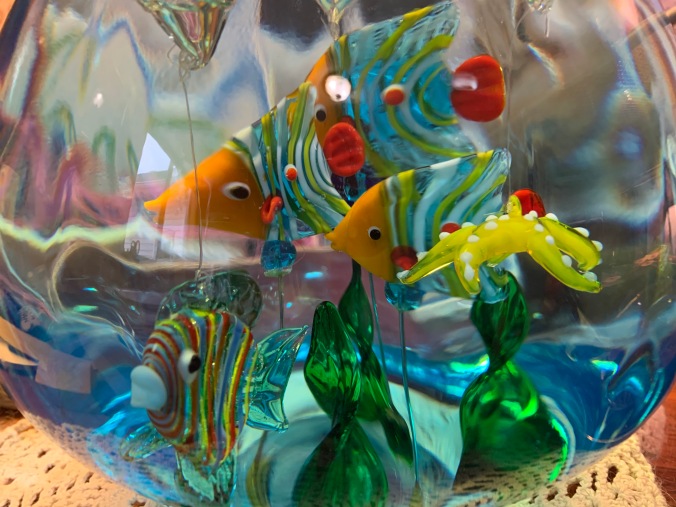 3 thoughts on “The Urge…to Purge”