As I mentioned in a recent post, we’ve been updating the kitchen appliances, and decided it was time to replace the fridge when it appeared it was possessed. We had a side-by-side that was 18 years old, and it had been repaired a couple of times already. The last time he was here, the repairman said to me “don’t spend money repairing it again, it’s not worth it. You’ve already sunk more into it that it would cost to buy a new one.” Hoookay.

So I became aware of this apparent “possession” when I would open the door to work on a meal and notice things were frozen on the fridge side – things that shouldn’t be, like lettuce, liquids or even eggs. I would look at the temperature dial and it would be on the coldest setting, and I would then ask hubby why he’d done that, whereupon he’d reply he hadn’t, and I’d say “well someone did” and we’d blame the cat that suddenly developed opposable digits. After about the 4th time this happened  and we took turns having fun blaming each other before we blamed the cat, we figured it was time to just kill the fridge and get a new one. We’d been thinking about this for some time already, and because we had a limited space to work in (without using a reciprocating saw and/or moving cabinets) the choices we had were limited, particularly since I had specific features I really wanted.

Looking online we found a scratch and dent in the model we wanted – a beautiful Samsung with French doors, the variable temp drawer and bottom freezer. It was in a town about 50 miles away and the salesman was kind enough to text photos to us of the scratches and dents, and we were confident our magnet collection would cover them, so we bought it and arranged for delivery.

It came on January 20, and I was SO excited. I had waited so LONG for the fridge. It was big, and sleek and gorgeous. Yes, it had some dings, but like I said, our magnets hid them, and we had it set up in no time. That evening we were getting everything organized and 24 hours later we had ice cubes from the dispenser. Life was good. I got it connected to the Samsung SmartThings app, which, among other things will alert you if your kids or spouse leaves the door open on the fridge.

On Monday, January 26 that’s when it all went to hell. The SmartThings app gave me an alert, telling me that the freezer compartment was too warm, and there was water on the floor, in the fridge, and the frozen veggies were melted. My first thought was an ice cube got stuck in the chute but then we realized the fridge was also warm. We tried to reset everything a few times without success and the next day called customer service at the store. They said they couldn’t come out until Friday, so we then called Samsung directly who said they would have someone there on Thursday. Well that guy tried everything, and couldn’t fix it. He set up ANOTHER call for the following Tuesday with another colleague to try replacing the compressor.

Keep in mind, it’s the end of January. In Minnesota. We are living out of 4 coolers in our garage. I know, I know, everyone is thinking “but it’s cold in Minnesota, right? So you don’t need ice for the coolers, that’s a good thing”. And you’d be right…except when it’s below zero and you have to go to the coolers MANY times a day for every little thing. Milk, ice cubes, butter, eggs, condiments. That good thing becomes a not so good thing really fast.

Tuesday comes, repair dude tries replacing the compressor and that doesn’t work. Now he’s getting concerned and calls Samsung to get permission to cut the lines open, which they do. I’ll bet most of you didn’t know that your refrigerator has some sort of system to dry the air in it and keep it fresh. Well it does, and our Samsung used silicone beads to do this. They are normally white or light gray in color, but when the guy cut the line and pulled out the container they were in, they looked like this: 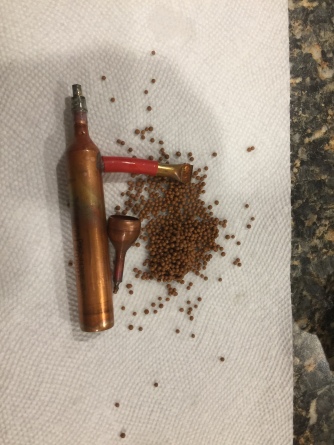 Yuck! Yeah, that’s not how they ought to look. That’s what happens when the fridge is tipped over on it’s side or back, and oil leaks and contaminates the entire system, and at that point your fridge is ruined. He sent a photo to Samsung, who agreed (in principle) it was toast. (One interesting thing that the repair guy did mention is that he sees this happen a lot with the units that come from Korea, not so much with the ones from Mexico, making him think it might be an issue on the cargo ships with loading or unloading.) Getting it formally approved for warranty replacement however, took about another 10 days and multiple phone calls.

Once that happened, I called the store we bought it from, got the store manager involved, and had to do some finagling to arrange for a replacement but eventually got that squared away as well. By the time we had agreed to have a new one sent out, it was February 10. Unfortunately the manager called me back a few hours later to tell me that they didn’t have it in the warehouse and it would need to be special ordered, which should take about a week. Fine.

A week goes by, and he calls again, full of apologies, because apparently 3 other folks have had issues with this fridge and also needed to replace it, and the damn thing is on BACK ORDER, and we have no idea when it will be in. He was also kind enough to be sensitive to how long we had already lived out of coolers, and said “this has gone on long enough, I’ve arranged to have a loaner refrigerator delivered to you.” A loaner? Who knew that was even a thing? That arrived about February 17, and we’ve been grateful ever since to have it.

So remember what I said about the replacement on backorder? I’m guessing it may need to come from Korea, and I really have no idea when it might happen, since we have this tiny little complication called coronavirus…

But we’ve got the loaner, and life is OK.

Update: I started writing this weeks ago, and realized I’d never posted it. Guess what? The new fridge arrives today!! Let’s hope it lasts longer than 6 days this time.

One thought on “The Great Refrigerator Adventure”