Thanks Tom, for another great idea for your monthly theme of “It’s the Little Things”!

Listening to the neighbor kids laugh and squeal the other night, my cousin was over and asked my husband and I if it bugged us, to sit and listen to other people’s kids hootin’ and hollerin’. I thought about it and said it didn’t, because they were having fun outside, just being kids, and not indoors playing video games. I thought back to my own childhood, and  remembered how much fund it was when  we used to play “Starlight, Moonlight” and “Kick the Can” and all sorts of other games, some real, some we made up, like the “Run Around the House Game”. I don’t recall the rules, but it involved running around the outside of either my house or my friends  house. We stayed out late, until mom’s voice called us home, sometime close to dark. Sometimes she would even have to call down on the phone (a real one!) to my friend’s house, and tell them to send me home. It was only about 6 or 7 houses away from ours, not very far, but around a curve so if it was after dark, she would watch for me. The yard light would be on, and she would be on the porch, waiting. Remember yard lights? Not house lights, but lights out in the middle of the yard? You don’t see a lot of those anymore.

And it was HOT. Holy crap. We didn’t have central air, only a big window AC in our dining room, so that it was comfortable in the evening where we sat, but not in the bedrooms so much. So at night, AC went off, and windows opened, and the box fans went into the windows, moving the nice, hot, sticky air around. Because that helped so much. If it was really ugly we could sleep in the finished basement. It was much cooler there, oh yeah. So instead of hot and sticky, you got cold and clammy. Hmm. Sometimes we’d sit up in bed, and make funny noises into the fan, because it was just hilarious listening to our voices change against the sound of the fan blades. When you’re little, it doesn’t take much.

As a kid, I felt like summer was magical. Fireflies and fireworks, sparklers and bottle rockets, sandboxes, swingsets and tire swings. We biked up to the 5 and dime, and got some penny candy, or to Brown’s Farmers Market, a little place nearby that was family owned, along the highway frontage road. They knew all of us kids by name, and it was just the coolest thing to get candy there, or an ice cold pop from the dispenser. I loved old Mr. Brown.

I remember pulling carrots out of the ground, wiping them on our shorts and just eating them, right there, or pulling an apple off the tree at grandmas, polishing it on my pants, and digging in. Garter snakes were no big deal, neither were worms. We drank from the hose, and yep, there was a metallic taste to it. I ain’t dead yet. We got into our swimsuits, and ran through the sprinkler for hours at a time, and thought it was wonderful! My sisters and I below, in our backyard.

I was lucky too, being a July baby, my birthday fell in the middle of summer, when everyone was bored out of their minds and ready for a PARTY!  That’s me in the middle for my 6th birthday (and my kid sister directly in front of me), with the lovely glasses and striped top. I love how our moms put all of us in dresses back then.

And I swear, watermelon tasted so much better then. I wish I could find seeded watermelon now. While seedless is easier to eat, the hybridization process removed the flavor…it just doesn’t taste the way it did. And let’s face it, seed spitting is part of summer too and now children are deprived of that.

Here I am, second from left, with the neighbor kids. I’m thinking it must have been a chilly day that day.

Happiness doesn’t need to come from big stuff, we’ve just allowed ourselves to become overwhelmed by the details of life. It’s the little things, really. Let yourself find them again.

So these past few days have certainly been an adventure for me. As many of you know,  I’ve been the lucky recipient of a new hip. As a nurse, I have both an advantage and disadvantage here. The advantage is that I knew what to expect in terms of the post-operative process, pain, fatigue, the need for pain medications and their side effects, and the disadvantage is that I knew what to expect….

Did I mention I also have no patience? I tell people that when babies are ready to be born, they get in the attributes lines to get the attributes they’ll have in life. I totally missed the line for patience. Saw a line, said “it’s too long, don’t wanna wait” and skipped it. So I came out of recovery and was ready to go directly to “I feel good and want to stand upright, have my leg straight and be pain free.” What I got instead was a dressing on my hip the size of Texas – because in your mid 50’s, doesn’t every woman want hips the size of Texas, FFS? – the ability to fall asleep in 2.3 nano-seconds thanks to Dr. Morphine, and a lovely wedge pillow to keep my legs in the correct but anatomically impossible position which will necessitate that this side sleeper sleeps flat on her back for several nights, a feat achieved ONLY with the assistance of the aforementioned Dr. Morphine and his lovely assistant Oxy. Cripes. (And don’t ask me to tell you anything more about FFS, other than it’s a little like “For Pete’s Sake” but a nearly safe for work variant on the ‘F-bomb’.)

Being a nurse, of course I know what’s best for me, and when I started feeling better I quit taking the drugs (‘cuz who needs em), and started using a cane instead of crutches the second the therapist told me I could…and promptly overdid it. Boy did I regret it about 24 hours later, as I laid in bed spasming at about 1:30 in the morning, poor hubby asking “what can I do?” I finally broke down and took the meds, and went back to crutches for a day to give my leg a rest. Time to take the nurse hat off and put the patient hat on, which is not an easy thing at all to do, especially when some of your closest friends are nurses too. They ask nursey questions, and holler at you in nursey tones, which are not unlike getting Catholic or Jewish mom guilt laid on you. You want to cringe, duck and cower in the corner. Don’t get me wrong, I’m not saying I didn’t deserve it, I’m did…I’m just saying I didn’t like it. But the payoff was worth it, and I do feel better today.

On a serious note, I’m as good as can be expected. No complications, I’m walking on my own with just a cane less than a week after outpatient surgery for a total hip replacement.  I should be ready to try driving in a couple of days, provided I am done with narcotics for the pain, and see the surgeon next week for a follow up visit. My Physical Therapist was pleased with where I’m at for a starting point today, which is all I can ask for. I no longer need the wedge at night as long as I keep an extra pillow handy for between my knees if I do try sleeping on my side. If this were 20 years ago, I would have been discharged about now from the hospital to a nursing home. Instead I’m comfortable in my own home. I feel blessed for just that, and even more so when I realize that there is one more thing from 20 years ago that I didn’t have to include as part of my post-op care: 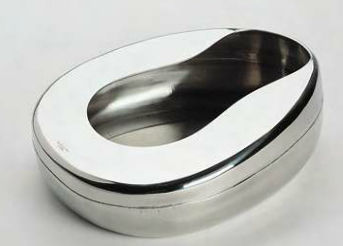 There comes a time in the lives of many adults when they find themselves entering a very special club. It isn’t one you can purchase a membership in, nor is it one that you can apply for. I’ve learned it doesn’t discriminate between age, gender, or income/ socioeconomic strata, although there are certain factors that do come into play that determine whether or not you can be admitted to the club. I’m talking about the New Parts Club. I think I’m among the first of my friends to join this club, and while I’m typically fine being the female ‘leader of the pack’, I could have been content in last place this time around, but noooo….. Tomorrow I will be getting a hip replaced, and of course it sounds really boring when I say it like that, so I had decided last week to try to have a little fun with it, and told someone “my new parts were on order”.  My brain being the warped and twisted little place it is, immediately came up with it’s own pictoral interpretation. So with all due respect to Jeff Anderson and all truly gifted cartoonists and illustrators, and to Diane Henders (imitation IS the sincerest form of flattery, and I promise you I won’t do it again soon, if ever!!) here is what it kind of looked like in my head:

I figured I would have better luck drawing it than bribing a real Fedex guy to pose for a photo op with me, so I could put a thought bubble like that over his head – or is it UPS that has no sense of humor? I forget. Doesn’t matter anyway. I’m to damn young for this, no matter how you slice it. I mean, aren’t hip replacements for old people?

I can remember when I was in nursing school, which was so long ago that sometimes it seems like it was in the Pleistocene Era, people were in the hospital for 4 or 5 days, had to have PT in the hospital using a walker, and if they had REALLY difficult procedures might even be on Stryker circle beds. Don’t even get me started on those flipping bedpans (although don’t worry, we didn’t actually flip bedpans, that would have been just plain wrong). Now it’s same day surgery, home on crutches and oh yes, my surgeon said, you’ll be putting weight on that new hip right away in the recovery room. Say what?!!!

I also stumbled on this wonderful little tidbit as well, and couldn’t pass up sharing it. So, for all my “Never Say Spy” peeps, and with a wink and a nod to Crimson Rainbow Butterfly, Beloved Blazing Universe, Blessed Star Freedom, Cosmic Rainbow Song, and most especially Starry Shining Poem…