After I woke up one recent morning, I looked out on the foggy backyard just waiting for enough warmth of sun to make it all go away. I had my first cup of coffee, and got out a new box of cereal, then opened the bag and r-r-rip! Right down the side about halfway. Grrr. Has anyone else ever done that? So that got me to thinking…with all of the changes that I see in packaging these days, and the addition of “zip closures” to so many things – chips, rice, frozen foods, pita bread, shredded cheese, the list can go on and on – why haven’t major cereal manufacturers figured this one out yet? I mean seriously? Oh some have, the generic, bagged cereals, but not the boxed ones. Not everyone is a family of 5 and going through a box of cereal a day, and even if they were a family of 5, they probably would have a variety of cereals anyhow! I’m guessing that people probably do what we do, which is to add a bag clip to the package, unless you have a day like today and then you have to empty the contents into a zip lock bag, or, they just transfer everything into a plastic container with a pour top and dispense from that. When my family had a cabin we had to do that, otherwise dry cereal became stale very quickly from the humidity.  So Quaker Oats, General Mills, Kellogg and others, I’m talking to you! Start putting cereal in resealable bags in your boxed cereals. Think of the great marketing you can do with that!! Not everyone is a big family, but I think everyone wants value for their dollar and HATES to waste food. On the other hand, when we have to throw out stale cereal it means we have to buy more than we planned for, so profits go up. Hmmm, no wonder why they don’t use the resealable bags…

Here’s another rant for you. I love coffee, and buy beans to grind for brewing. We usually buy the large bag of Dunkin’ Donuts because it tastes good and is a good price and I don’t mind the free plug I’m giving them. (“Hey Dunkin’, yoo-hoo!”) BUT…they do have one thing I have a problem with, and I actually sent them an email about it maybe a year ago. They sent me a generic “thank you for your concern” and some coupons in response, but to date I’ve never seen a fix. Here’s the deal. Take a look at the pictures below: 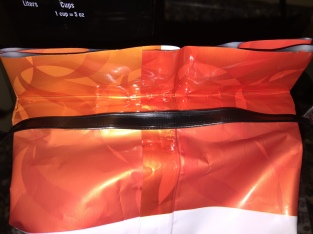 Note that the bag comes with a nice twist tie attached for you to use to reseal the bag after you open it. Handy, right? Except…they attach the twist tie just below the spot on the bag where it’s sealed shut, and it’s not like you can open the seal by separating it with your hands. Nope, you need to cut the bag open with a scissors, so you have to cut off the top part of the bag, below the seal, and you end up cutting off the twist tie. You then have to go back, pull the tie OFF the part you just cut off to be able to use it. My suggestion to them was to glue it lower on the bag so you could cut between the twist tie and the seal, and then the tie would stay attached to the bag, letting you just roll down the top (like a competitor does) and you can’t loose it. Simple! The current way is a pain, especially at 5:30 in the morning, trying to open a new bag while I’m still half asleep.

Quite a few years ago, when we had a home on a wooded lot, we treated ourselves to a birdfeeder called a “Yankee Flipper”. It’s a squirrel-proof feeder, and if you’ve never heard of it, go to YouTube and look it up, there are some hilarious videos out there. When we moved to our new house we didn’t use it for a while, because we didn’t have squirrels. Now we do so I dug it out but the battery no longer holds a charge. It’s a nickel cadmium battery, and as you probably know over time if you don’t use them, they won’t charge. I contacted the company, and yes, you can buy a new “power stick”, which is the battery and motor unit…for $90! (A new feeder is $165 now).  But…and here is the big problem I have. When I asked them if the batteries are nickel cadmium, or if they have upgraded to nickel metal hydride or lithium, they told me they are still NiCad. WHAT? You want me to pay $90 for something that I know will go bad again, so I can pay that much for it one more time? Um, how about no? So my husband and I did what the little power stick said not to. “Do Not Open This…Your Warranty Will Be Void If You Do”. Well it was out of warranty years ago. So we opened it, figured out what kind of NiCad batteries they were, did some internet sleuthing, and ordered them along with some wire glue so they could be connected the same way the originals were. Total costs with shipping? $22.67.

Kudos to a company too, since I can’t complain ALL the time. I absolutely LOVE the new top on the Advil for Arthritis bottles. It’s a bit larger and has a scalloped edge, making it easier to grasp if you have arthritis, which I’m starting to feel in my hands. I keep one in each level of my house and just refill from a larger bottle.

So apparently one company did listen to their customers, but will others? Is sure seems that if it helps customers but hurts their bottom line, we’ll never see that change, so we can probably kiss the sealable cereal bag goodbye. I still have hope for Dunkin’ Donuts though.  Any of you have suggestions for manufacturers, changes you’d like to see?