After making a grocery store run the other day, I’d just finished wiping the packaging down and my husband was starting to put things away when he made an interesting observation. “There’s an awful lot of exclamation points on the packages. Just about everything has one.”

We started looking at the packaging of prepared foods and snacks, and it was readily apparent how right he was. I took some pictures and here are a few examples: 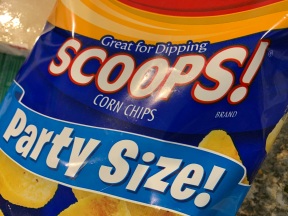 Even Ree Drummond’s jar of marinara sauce had to get in on the act.

On the back label, where it describes the sauce, the end of the paragraph reads “…it’s a cheese lover’s dream!”

Apparently the exclamation point has been around since the 1500s, and was a derivation from “io” which was an expression of joy. Eventually it morphed into being written with the I over the O to shorten up space. Who knew? (It should also not be confused with the catchy chant from down under that is heard at sporting events, “Aussie, Aussie, Aussie” immediately followed by “Oi, oi, oi!” But that’s spelled differently and as far as I can tell, doesn’t mean anything other than a general “we love you, support you and are tipping a pint in your honor, mate!”

Since then, marketing ‘geniuses’ everywhere have co-opted the exclamation point and want us to THINK it means something akin to joy, when it really just means “I want you to think you can’t live without me.”

Obviously it’s working, otherwise they wouldn’t continue doing it. Even on healthy choices, they’re using it to make you feel good about what you just picked up. “You made this choice, it healthy, how smart of you.” Or maybe the message is “Well aren’t you the good planner.

Your gathering will be special because you have enough crackers. It’s a family size box and you won’t run out, no one will be hungry or feel slighted. But what would happen if it weren’t there? Would you still buy the product? Of course you would. The bigger question is, are you driven to buy one brand over the other because of the exclamation point? I’m going to guess probably not, unless you’re either a) trying a completely new product or b) that exclamation point is part of something else in the packaging that caught your eye, such as telling you that it has “30% more!” in the package. Seriously, would you buy it if the label just said “!”? Of course not, it’s the “30%” that gets your attention.

It isn’t limited to foods, either. The cover of a clothing catalog had this at the bottom:

And this isn’t some new phenomenon either. I’ve been working on selling some HO scale trains on eBay, that had belonged to my father, and included in them are some of the catalogs he’d ordered from including a Tyco 1972-73 and several Fleischmanns. On the back page of the Tyco the description accompanying the photo for the Super Road and Rail ( a combination slot car and train set up) “Two complete sets in one!”.  The inside cover of the Fleischmann catalog from 1973 has this:

For the curious, if my Google Translate is doing it’s thing correctly, here is the translation (for my Canadian and French-speaking friends, please correct any mistakes!).

Hey! Friends! Embark and take a seat on a dream trip through the Hobby Kingdom. This is what is Extraordinary at FLEISCHMANN! You realize every moment that all fabrications are the result of a fundamental principle of precision, a constant study of quality and a continual tendency towards perfection. Everything matches and everything adapts, which is why the name “FLEISCHMANN” is the best guarantee for your confidence in a quality article. FLEISCHMANN is your protector against boredom! Whether you only have a few minutes or several hours! With FLEISCHMANN you have a permanent passport for permanent fun, which is why we wish you “Bon Voyage”. Sale to the consumer is only through retail stores. We will be happy to give you the addresses of our dealers. and rights reserved. By the publication of this catalog, all previous catalogs and current prices are canceled. – All modifications Printed in Germany INN 8.73 Ho Any advice will be gladly given to you by your retailer.”

Next time you’re at the store, or even shopping online, look at the labels of things and see if you notice it. Once we started looking, it was goofy how many we found in a single grocery trip.

By now you’re probably starting to wonder, what in the world does F. Scott Fitzgerald, that great literary genius of “The Great Gatsby” fame, have to do with exclamation points and grocery stores? The answer is quite a bit, actually. He once said this, and it’s rather apt:

I have to admit, I wholeheartedly agree.