It seemed like every time I turned around, I was seeing another use for Mr. Clean’s Magic Eraser sponge. “Get marks off your walls!” “mystery marks on cabinets? No problem!” and best of all, “scuff marks on patent leather go away so easily with the Magic Eraser” (it’s true, they do. When I was traveling for business I kept a small one in my wheeled computer bag for my work shoes.) But if you use these, you also know they can get expensive, as they also magically disintegrate and disappear with use.  At Target, Walmart, and Amazon, a 4 pack of the “original but 2x stronger” (if it’s 2x stronger, then how is that the original, but i digress) costs .87¢ a sponge. That adds up fast! So when I stumbled on an article about making your own for a whole lot cheaper, I thought I’d give it a try. I ordered melamine sponges from Amazon, and then made up a solution of warm water, Borax and baking soda. (1/2 cup warm water, 1 tsp Borax and 1 Tbsp baking soda.) After those were mostly dissolved in the water I dunked the sponge in the water, let it absorb the liquid then squeezed most of it out and tested it on some marks I found on a lamp. This is a free standing gooseneck floorlamp that I use for crafting, and my husband looked at it yesterday and wanted to know how I’d scratched it so badly. 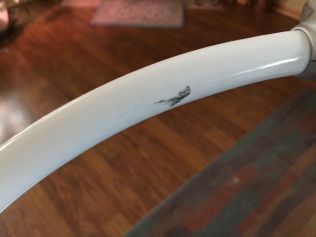 After using my homemade magic eraser: 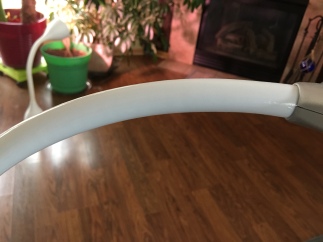 Estimated cost for my eraser? .59¢ for the sponge, 1.2¢ for the baking soda and <1¢ (.006 actually!) for the Borax for a total of under 61¢. Now I can guess what you’re thinking…20¢ isn’t a huge amount to save, and you could be right, especially if you’re a fanatic about coupons. But here’s the thing about that. I only bought a small bag of them because I didn’t want to be stuck with a huge container if this was a fail. I’ll keep working with them a bit but so far I’m happy with it. Assuming it does work well, you can get a bag of 100 for 7.59, which comes out to 7.5¢ per sponge, bringing your total cost per sponge, soda and Borax to less than 9¢. (And you can get more than one sponge saturated with the amount of liquid, so it’s really even cheaper than that!) As my husband and I like to joke around with each other, “How do ya like me now?”

…How to Clean Grippy Rubber

Note: Includes an update on the homemade magic eraser. Have you ever had something with black rubber grippy stuff on it that has gotten really nasty? We had a remote control that was just plain gunky, covered with dust, cat hair and lord knows what else. After a fair amound of research, it seemed the best thing to use to clean it was WD40. So I tried putting that on my finger, then rubbing it on the rubber. I tried first wiping it off with a soft cloth, that didn’t work. I reapplied it and let it sit for a while, then wiping it off, that didn’t work either, still gunky. Third time I reapplied and let it sit, then came back and cleaned it off with my magic eraser. It completely removed the gunk. Disclaimer, it also did remove the grippiness of the rubber, which is probably from the abrasive action of the sponge. But you have to ask yourself if the trade-off was worth it, and for me the answer is “yes”. The alternative was not touching the remote, as the “eww” factor was getting up there.  (I also have tried cleaning grippy black rubber on something else with a store bought magic eraser and no WD40, didn’t work well at all.)

Extra notes of caution: Anytime you’re cleaning electronics, whether it’s a floor lamp, a remote control unit or anything else, just remember a couple of things. 1. Never spray anything directly onto your item. For the WD40, I applied it to my finger first, then used my finger to put it on the remote. Even though WD40 displaces water, and some people use it in electronics, my feeling is that it’s better to be safe. 2. Water is also not a friend of electronics. Squeeze out that sponge as if your life depends on it, and have paper towels close by to wipe off drips quickly. You really don’t want water getting inside the cases of things you’re working on.

…How to Clean White Crusty Water Stains Off Things

You know the white crust that you get on things, like around your sink, or maybe on the drip tray for your ice maker, or even the floor mats of your car? I’m a great believer in less manual effort and more “find an easier way” if I can, and for that stuff I have. I soak it in some white vinegar. Usually about a 10% solution will do, but if it’s particularly stubborn I’ve gone stronger, even up to full strength. Yesterday I took the winter floor mats out of my car and poured some into them and let them soak for about an hour to get the salt residue loosened up. Worked like a charm! After I rinsed that off, I gave em a quick soap scrub and then they were done.  For sinks, I take an old rag and soak it, wrap it around the base of the faucet and let it soak for thirty minutes or so, then check and see if the crust has softened enough to either wipe off or scrape (gently and carefully) with a razor blade. We have a recirculating water fountain for our cats water dish, made of stainless steel that I’ll take apart and soak in vinegar as well. Again, why spend time scrubbing when I can soak that crap off? Put some in a spray bottle and spray down your shower, especially if you have glass doors. Let it sit for a bit then wipe off and it will help to get the built up soap scum off. If it’s really bad you might have to do it a few times.

My promise: I will never share something with you that I haven’t personally tried. I won’t tell you it works if I can’t prove it. Where possible I will share photos or a video. If something is an epic fail, well I’ll tell you that too as I think that is just as valuable, even if I end up looking ridiculous doing it.