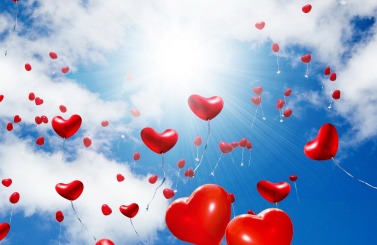 Floating in the summer sky
Panic bells, its red alert
There ‘s something here from somewhere else
The war machine springs to life
Opens up one eager eye
And focusing it on the sky
The ninety nine red balloons go by

I was watching the Minnesota Vikings losing… again… last fall when a commercial came on for TCF bank. The music accompanying the commercial was quite catchy, and somewhat familiar, and I stopped and listened and realized it was “99 Red Balloons”, a very upbeat, peppy pop tune from the early 1980’s recorded by Nena. (Many know it as “99 Luftballoons”, the German version of the song.) But here’s the thing…just because a tune is all peppy and catchy, doesn’t mean it’s best used for a commercial. I mean, should you use a song about war, the nuclear holocaust and the end of life as we know it to sell your banking products? Really? I know you can… but should you?

My husband has heard me utter that phrase so many times over the years, he’s probably sick of it. “Just because you can, doesn’t mean you should.” He typically hears it when we see something that appears particularly visually egregious to us when we are out and about, however over the past year and a half since I started writing this blog, it’s started to mean something more. As social media becomes more prevalent and, along with that, invasive in our lives, it becomes necessary to recognize the criticality of our responsibility in that domain. No longer are we merely writing words, but we’re writing words with the power to hurt as well as heal, to destroy as well as develop. It’s become so easy to say whatever we want to, cloaked in the veil of protection afforded by not being face to face with people, and looking them in the eye. The upside of being face to face with someone and speaking to them of course, is that you hear nuance and tone, you see body language and you’re in the moment. You can respond immediately, defend and refute. With posts like Twitter, all of that is lost. Is it sincere or sarcasm, are they kidding around or cutting you down? In the space of time it takes you to figure it out, “pop goes the weasel” and the whole world has now seen the post. A reputation is ruined, someone is shamed, a war has begun.

Years ago I remember hearing “be really careful about what you put on social media with your activities, it could cost you a job.” Yet too often it seems that the long term impact of what is put on social media isn’t considered. It’s all about firing the first shot, not ensuring you tooks steps to make sure the last one is done. There was a story recently about a prank played on a young boy via social media, telling him that a girl he considered his girlfriend had committed suicide, so he killed himself. He was 11.  So many lives wrecked because of poor decisions.

Consider too, how quickly stories go viral. In the past several weeks we had Pepsi pull their commercial with Kendall Jenner due to racial insensitivity, United Airlines debacle dragging a customer off an airplane and Sean Spicer and his terribly inappropriate statements about Hitler and the Holocaust on Passover.  Within hours it seems the whole world was talking about each of these incidents in Twitter. I loved George Takei’s take on the whole thing, when he tweeted this out:

I thought it was funny, but also a good reminder that it’s starting to feel like we’re playing “Whack-A-Mole” with all of the ridiculous “are you kidding me? [face palm]” events we read about on the internet and it’s getting harder and harder to keep it all straight!

So I’ll use these examples for myself as lessons, golden nuggets if you will, reminders of how fleeting moments are, that cyberspace is forever. The best way to ensure your sex tape is removed from the internet is to never make one in the first place, be kind and gentle with others, stand up for people when they can’t do it themselves, and ask yourself “just because I can, should I?”

4 thoughts on “Just Because You Can…”